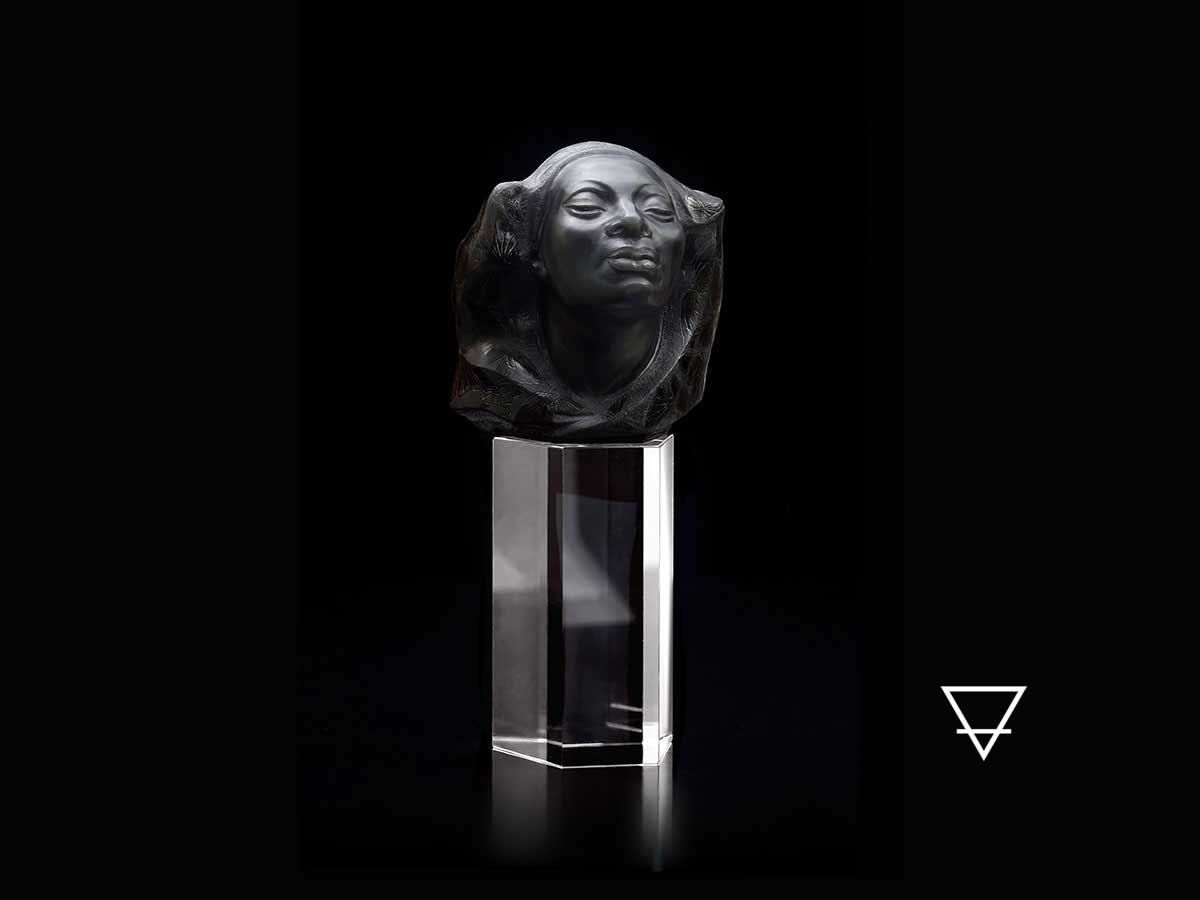 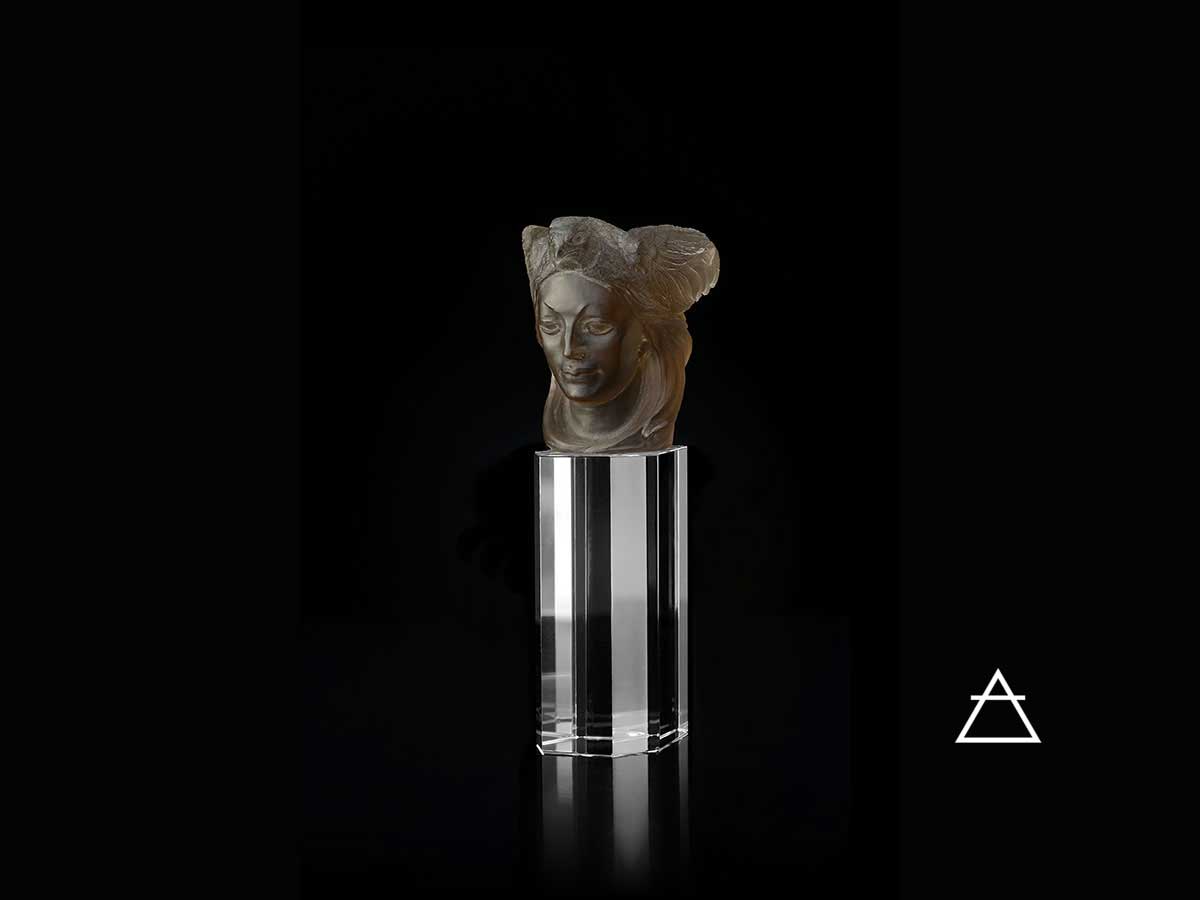 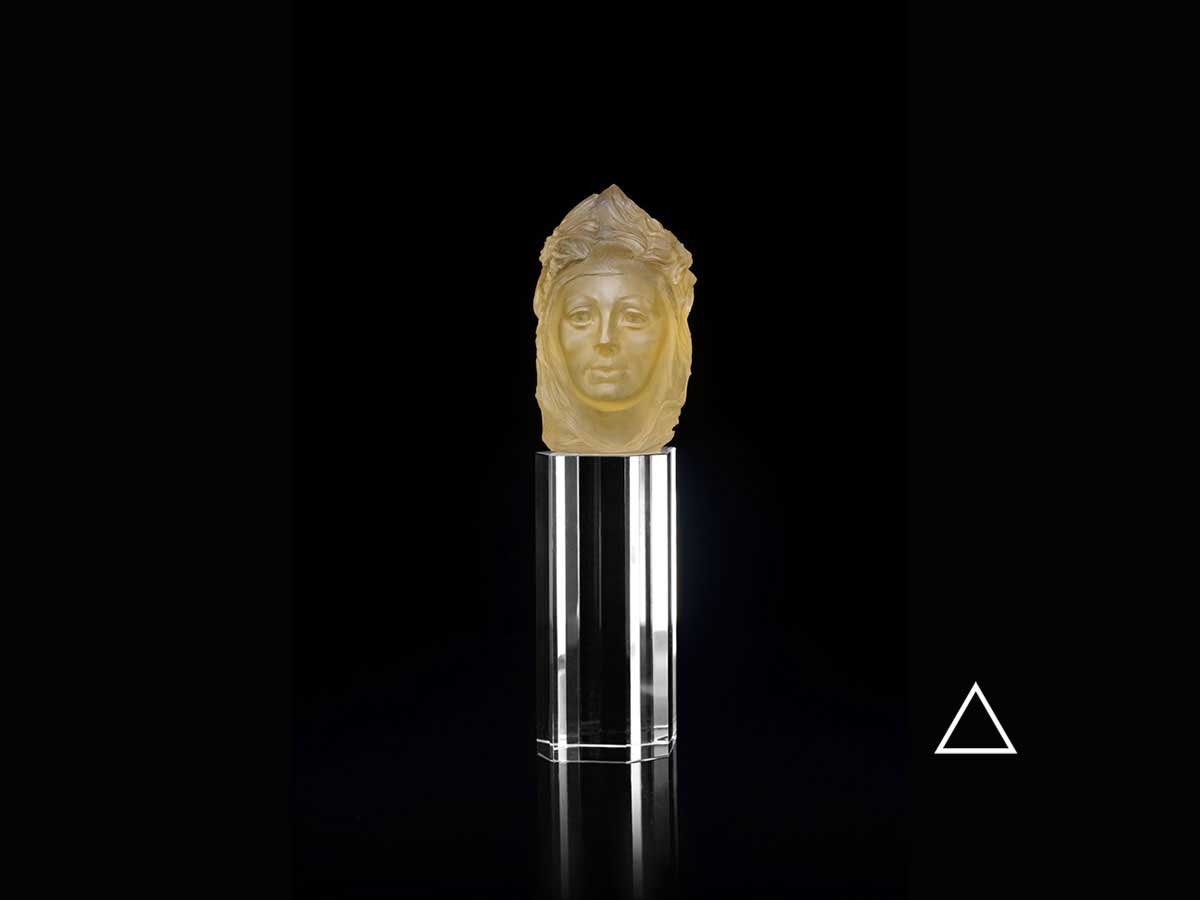 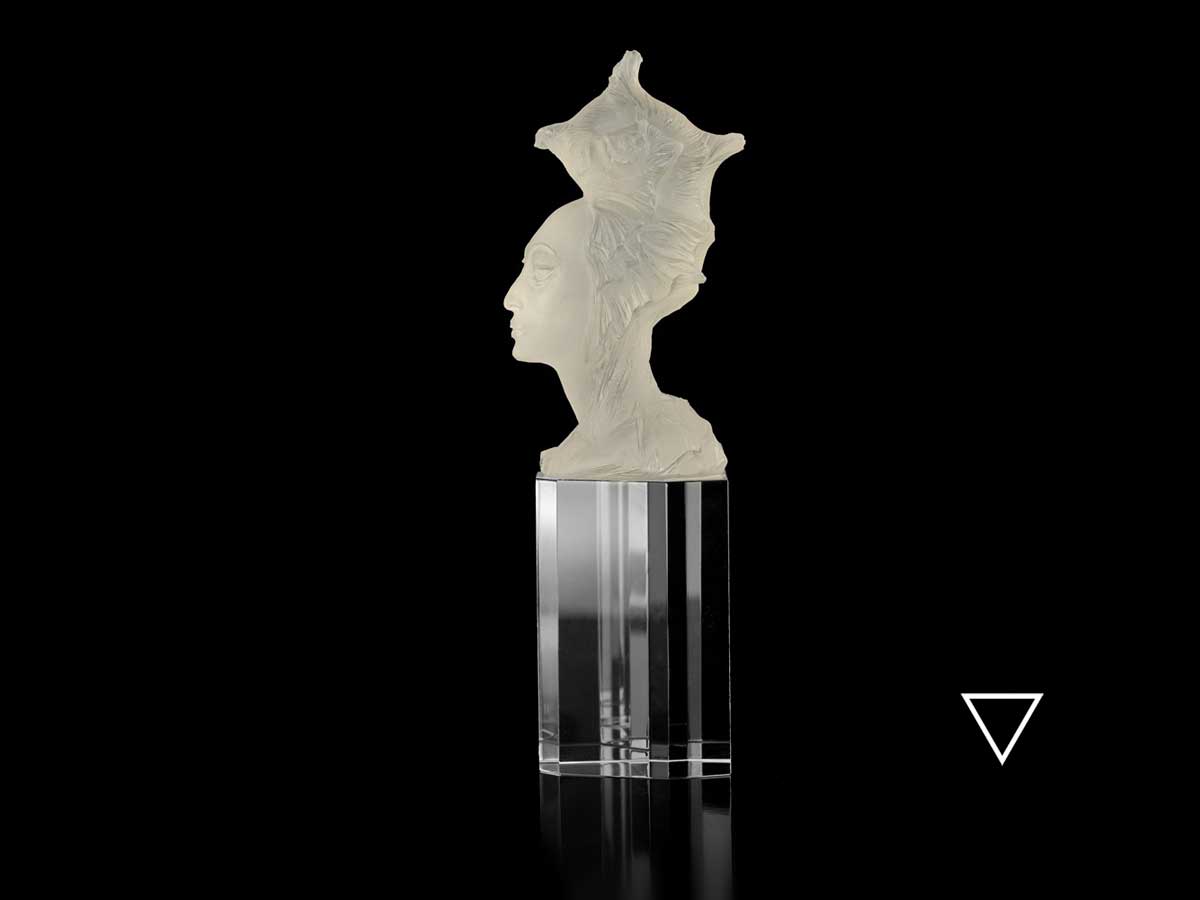 The composition “Union of Four Elements” is the Author’s philosophical reflection on the structure of the Cosmos, on the harmony of the Universe, embodied in symbolic images of women carved from stone in the form of miniature busts mounted on crystallic prisms made of rock crystal.

Each image of a woman symbolises a certain time of the year, part of the world, time of the day, an alchemical element, both referring us to the Eastern views on the Universe, and engendering allusions with ancient, European art, mythology of different peoples, where allegories to any abstract concepts were often given human form particularly in female images.

To accomplish this arduous task, the artists chose four different ethnic types of a female face, and each image epitomised certain cosmogonic elements. At the same time, each image in this composition has its own emotional state, its own aura and magic - enchanting and mesmerising.

For instance the head of the Virgin with a headdress in the form of a bird of prey that is magnificently carved from translucent smoky quartz symbolizes Air, Evening, West, Autumn and becomes an expressive sculptural metaphor for omnipresent abstractions. This work refers us to the cultural horizons of the past, begets chains of subtle associations that evoke a keen emotional response deep inside.

The female head, delicately carved from rock crystal, whose image is crowned with a shell helmet, symbolizes Water. It marks the first motion in nature after a long winter, which brings a sense of spring, remaining the white light of Morning in the eternal flow of time.

The spiritualised head of the Nubian, that symbolises Night, Earth, Winter, North, is gorgeously carved from black rainbow obsidian. Her eyes are closed, she is immersed in self-contemplation or reflection - the Night always bodes for it. The work skilfully uses the contrast effect of matte dark obsidian in the face of the maid and splashes of greenish polished stone in the image of carved hawk moths scattered around the head cloth. The style of this work demonstrates the influence of Art Deco, which flourished in the 1920s, and today is again relevant and in demand.

The same expressiveness can be seen in the head of a woman with Slavic features, carved from yellowish lemon citrine, beloved stone of modernism. Her head cloth is wreathed with delicately intertwined leaves and resilient flower stems, incarnating Summer, Noon, Fire, this is what symbolists of the Art Nouveau era were so affectionate towards.

Refined faceted pedestal made of rock crystal seem to lift, transfer the images from the earthly world to the heavenly world, while giving the whole composition a sculptural and metaphoric integrity. Artfully used decorative effects of coloured and transparent stone, contrast of matte and polished surfaces, and finely designed sculptural ornaments create compositions that are both metaphorically complex and subtle in mood and their emotional state. These compositions have materialised the depth and earnestness of the artist’s creative thoughts. All this allows us to attribute this composition to the works of the museum level.

The author of the project is Olga Mironova.

In the course of visual fine art expert attribution analysis, it was established that the presented icon is a rare sample of modern clerical art wherein the best traditions of the icon painting, enamel craft and jewellery schools of Russia are seamlessly combined on a high artistic and technical level.The masterful artwork in the genre of enamel miniature painting is supplemented with as much consummate jewellery work on the icon's setting.

In the reviewed icon, the Cross supporting the roof of the Temple replaces the central pillar. Christ is represented as the Support of the Church. There are the followers of the Earthly Church around the Temple, led by Our Lady the Virgin Mary. There is a shining Heavenly Church in the upper part of the icon.

The Wisdom Creates Itself a Temple iconography is extremely rare, and in this case, it has been represented in an enamel icon in the miniature enamel painting technique for the first time. The enamel miniature painting is executed on the highest artistic and technical levels, in an unusual coloristic solution, which gives an altogether solemn, stately look to the icon, and a remarkably refined, profound understanding of the iconographic sense of the presented depiction version. The highest class of the enamel icon demanded that the artists who placed the icon in the setting produce impeccable jewellery craftwork, both in the artistic-decorative solution and in jewellery art and technical level solution. The task was successfully resolved.

The combination of several jewellery techniques, typical of the traditional Russian jewellery art, and the use of sawing on a gilded background both create the feeling of splendour, grandeur, the beauty of the setting, which is greatly intensified by using precious and semiprecious stones in the artistic decoration of the setting. Not only is this typical of the Russian jewellery tradition in the clerical art, but of the Russian comprehension of the Beautiful, Rich, Solemn; when colourful precious and semiprecious stones are used along with precious metals which enhances the multicolour impression of the Product.

It is colourfulness that is inseparable from the notion of Artistry in the Russian art. This was subtly felt and scrupulously and impeccably embodied in the jewellery work by the authors and the crafters of the setting. Deep and respectful understanding and the employment of the heritage of the national jewellery school are emphasized in the goldsmith work on the back of the icon's setting, almost as multi-faceted as the jewellery work on the front of the setting.

This icon belongs to a range of those exclusive custom-made pieces of art which can be referred to as "modern antiques." Their artistic and technical level of execution in the material is not inferior to the best museum artefacts of the clerical art and jewellery art of the past. Created in 2016, the Wisdom Creates Itself a Temple icon has been crafted on the highest artistic, jewellery and enamel art craftsmanship levels.

It is of artistic, museum and collector's value.

Member of the Society of Jewellery Historians, the United Kingdom
Expert of the Ministry of Culture of the Russian Federation